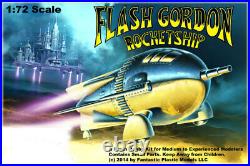 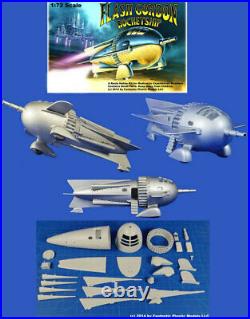 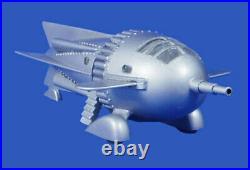 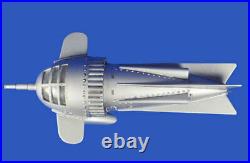 Flash Gordon Rocket is based on the purported filming miniature seen above. It features a full interior, doors that can be positioned opened or closed, and a clear vacuform canopy and windows. Scale: 1:72 Number of Pieces: TBD Pattern: Ed Holt Casting: BLAP! Models Length: 8.5 inches.

"Flash Gordon" starring Olympic swimming medal winner Buster Crabbe was the first cinematic treatment of Alex Raymond's intrepid space hero who debuted in comic form in 1934. Distributed by Universal Studios, the serial was filmed in 13 parts running a total of 245 minutes. Build by the brilliant Dr. Zarkov, the Flash Gordon rocket underwent numerous modifications between "Flash Gordon" (1934), "Flash Gordon's Trip to Mars" (1938) and "Flash Gordon Conquers the Universe" (1940). Most obvious among these was the addition side windows and a nose cannon between the first and second serials.

MONSTERS IN MOTION STORE POLICIES. Monsters In Motion has been serving the collectible industry for over 27 years with unique merchandise related to Film, Television, Horror, Pop Culture, Gaming, Science Fiction and Fantasy. Your satisfaction is important to us, we will always do our best to help you if there's a problem with your order. Visit our site for more rare and unique model kits!

This item is in the category "Toys & Hobbies\Models & Kits\Figures". The seller is "monstersinmotionstore" and is located in this country: US. This item can be shipped worldwide.